For since the creation of the world God’s invisible qualities—his eternal power and divine nature—have been clearly seen, being understood from what has been made, so that men are without excuse.   – Romans 1:20

God’s creation is amazing. My oldest son and I were having a conversation about this yesterday and he said, “I mean, how could anyone not believe in God –like, this doesn’t all just happen by itself! Everything God made is just like so amazing!” Well-said, I thought.

I was at one of my favorite prayer spots this morning, about a five or ten minute drive from my house, up on the coastal cliffs… here’s a photo I took with my phone:

As I was spending time with God I had one of those tingly, kind-of other-dimensional worshipful moments of just marveling at all God has made. There is so much we take for granted. There are so many things we consider “ordinary” that are really so amazing.

I remember years ago, when I was living in Denver, this preacher came through town (Gordon Ferguson) and preached a sermon called “Glory in the Ordinary”. It really resonated with me. I am by nature a negative, melancholy, glass-is-half-empty kind of person (maybe like most artists?). His challenge to just pause and see glory in the “ordinary things” we take for granted really inspired me. I wrote a song about it called “Glory in the Ordinary”.

A phrase in the song, “rocks and trees,” became the title for an album I put out a few years back containing that song along with 14 others. I painted a picture for the CD album cover that was of my oldest son (two years old at the time) and representative of some of the stuff in that song: 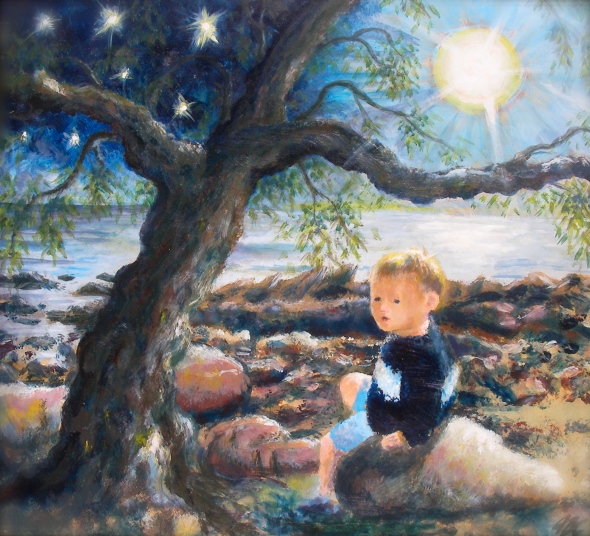 Here is a recording of the song that is on the CD, Rocks and Trees.

Glory in the Ordinary

There is also an old hymn (100 years old) I used to sing growing up that says something about “rocks and trees.”   It’s called “This is My Father’s World.”  I think it was probably in my mind when I wrote the chorus of the song above.  I love the words of this hymn about God’s creation.

This is My Father’s World

I made a quick video of a medley of these two songs together. Welcome your comments!

All Posts (most recent first)